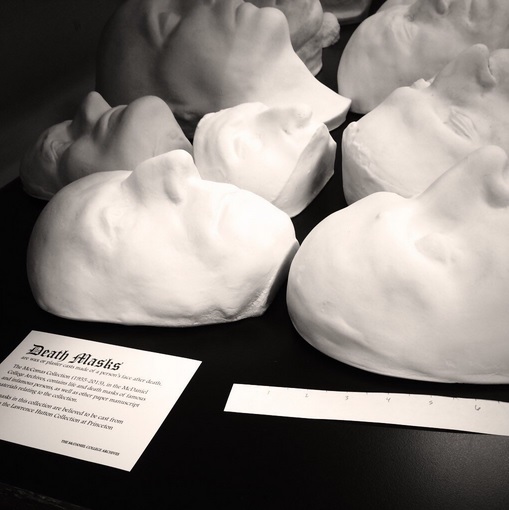 Death masks are wax or plaster casts made of a person’s face after death. The McComas Collection (1955-2013), in the McDaniel College Archives, contains life and death masks of 66 famous and infamous persons, as well as other paper manuscript materials relating to the collection. The masks in this collection are believed to be cast from masks in the Lawrence Hutton Collection at Princeton University. They were collected by Dr. Henry C. McComas, and given to the College by his cousin, alumni Philip Myers.

View the Archives Catalog record for the McComas Collection.

The masks are listed below in alphabetical order by name. Dates given are years of birth and death.

If you are McDaniel Faculty and would like to use the masks as an educational tool for your classes, please contact the Archivist to make arrangements.

Dante Alighieri (1265-1321) – Italian poet and statesman of the Late Middle Ages; author of the "Divine Comedy"

Napoleon Bonaparte (1769-1821) – French military and political leader who rose to prominence during the French Revolution and subsequent Revolutionary Wars; Emperor of the French from 1804-1815

Edmund Burke (1729-1797) – Irish statesman, author, orator, political theorist, and philosopher, who served as a member of parliament in London, England as a representative of the Whig Party

Camillo Benso, Count of Cavour (1810-1861) – Italian statesman and leading figure in the movement towards Italian unification

Samuel Taylor Coleridge (1772-1834) – English poet, literary critic, and philosopher; considered a founder of the Romantic Movement in England with William Wordsworth, with whom he jointly published "Lyrical Ballads"

Benjamin Disraeli (1804-1881) – British politician and writer, twice serving as Prime Minister, who played a central role in the creation of the modern Conservative Party

David Garrick (1717-1779) – English actor, playwright, and theatre manager and producer who influenced nearly all aspects of theatrical practice throughout the 18th century; pupil and friend of Dr. Samuel Johnson

Girl from the River Seine (L'Inconnue de la Seine) (ca. late 1800s) – An unidentified young woman whose body was pulled out of the Seine River at the Quai du Louvre in Paris in the late 1800s

Ulysses S. Grant (1822-1885) – 18th President of the United States and leader of the Union Army during the American Civil War

Maria Malibran (1808-1836) – Spanish mezzo-soprano who was one of the most famous opera singers of the 19th century.

Napoleon III (1808-1873) – Nephew and heir of Napoleon I; only President of the French Second Republic and Emperor of the Second French Empire

Thomas Paine (1737-1809) – English-American political activist, philosopher, political theorist, and revolutionary; one of the Foundinf Fathers of the United States and author of "Common Sense"

Maximilien Robespierre (1758-1794) – French lawyer and politician, an influential figure of the French Revolution, the defense of the Republic, and the Reign of Terror

Richard B. Sheridan (1751-1816) – Irish satirist, playwright, and poet; long-term owner of the London Theatre Royal, Drury Lane; author of "The Rivals" and "The School for Scandal"

William Tecumseh Sherman (1820-1891) – American soldier, businessman, educator, and author, who served as a General in the Union Army during the American Civil War; received criticism for his "scorched earth" policies during warfare against the Confederate States

Wilhelm Richard Wagner (1813-1883) – German composer, theatre director, and conductor, primarily known for his operas; composer of "Ride of the Valkyries"

Daniel Webster (1782-1852) – American statesman who served in the House of Representatives and as a U. S. Senator, twice the U. S. Secretary of State, serving under three presidents