The Ridington family contributed to the Western Maryland community in a number of ways during their nearly 60 years of combined teaching on the Hill. 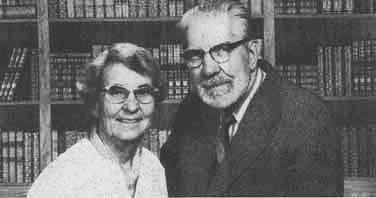 After graduating from Mercersburg Academy in 1926, Bill earned degrees in Classics and Greek from Princeton (A.B. and A.M.) and the University of Pennsylvania (Ph.D.). He joined the Western Maryland (now McDaniel) faculty in 1938 and retired in 1973. During this distinguished career, he held membership in ten professional associations, often serving as an officer. He also made contributions to his field in such journals as Classical Weekly and Classical World, and was widely recognized as an authority on the origins of ancient Greek athletics and games.

Edie graduated with "Honors in Course" from Mount Holyoke in 1933 with a major in Greek and a minor in archaeology. She earned her Phi Beta Kappa key in her junior year. In 1934, she was granted an A.M. in Greek from the University of Pennsylvania and completed two additional years of study in the classics. In 1957, Edie began her 20-year career as an adjunct instructor with the classics and English departments, a position she also held at Hood in the mid-seventies. She was named Senior Lecturer in Classics Emerita by Western Maryland (now McDaniel) in 1988. Edie played a major role in establishing a Phi Beta Kappa chapter on the Hill and became a charter member when the chapter was established in 1980. The Edith Farr Ridington Phi Beta Kappa Writing Award, given annually to a graduating senior who writes the best original research paper, was established in her honor in 1991.

The annual Ridington lecture honors two long-time teachers at McDaniel, William Robbins Ridington and Edith Farr Ridington. After the Ridingtons’ deaths, their family endowed this annual lectureship, which began in 1991. Below is a list of past Ridington speakers. Due to the COVID-19 pandemic, no lectures were held in 2020, 2021, or 2022.

Click on the names in to open a new window with a search of all items by that speaker.

2018 – D. Watkins, “Beyond the Internet: Why Quantifiable Goals Trump Hashtags”

2017 – Bruce Friedrich, “Seeds of Disruption: How Markets and Food Technology Will Save the World"

2015 – Sheldon Danziger, Ph.D., “Legacies of the War on Poverty: Implications for the Future of Antipoverty Policies”

2012 – Dr. Jeffrey Quilter, “In Small Things Remembered: The Archeology of the Spanish-Indigenous Encounter in Peru”

2007 – Michael Nylan, “Beliefs about Seeing: Optics and Theories about Misperception in Early China”

2004 – Judith E. Tucker, “Finding the Feminist Voice: Islamic Law and the Feminine in Theory and Practice”

1998 – Shawn R. Lyons, “Confronting the Sublime: Hiking with Edmund Burke in the Mountains of Alaska”

1991 – Robin Ridington, “Freedom and Authority: Teachings of the Hunters”